The 100% owned LIL claims are in the Swannell River area in the Aiken Lake district of the Omineca Mining Division, 350 km NW of Prince George, British Columbia. Logging roads provide four-wheel drive access to the property within 3 km of the main showings. The elevation ranges from 1,100m to 1,800 metres. 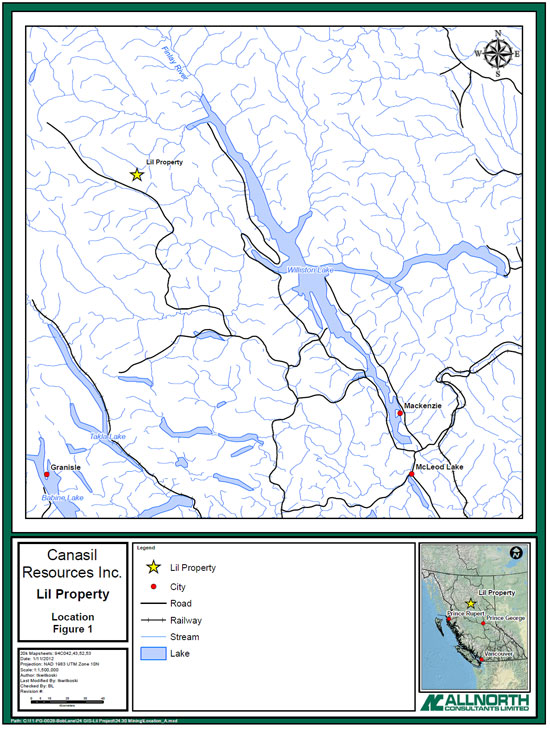 Mineralization on the property consists of narrow high grade, silver bearing quartz veins and breccia zones, which are hosted in quartzite and a granitic dyke near fault intersections. The silver-bearing structures have been identified over a distance of 300 metres. Two types of silver bearing floats have been identified in the drift fan of LIL creek. Smaller floats from narrower veins contain arsenopyrite in addition to silver-bearing sulphides, corresponding well with the vein outcrops along LIL creek. Larger floats, indicating greater widths, contain no arsenopyrite, very little sphalerite and more polybasite and ruby silver. Their internal structure also shows less quartz and more quartzite inclusions. As this structure is not seen in the outcrops, it is assumed that the larger floats come from other veins not outcropping in the canyon. The narrow silver bearing quartz and breccia veins show similarities to the Keno Hill-Galena Hill mining camp in the Yukon.

Channel sampling of the exposed silver veins along LIL Creek has returned values ranging from 148 g/t Ag to 11,159 g/t Ag over widths ranging from 0.20 to 0.90 metres (see table below). The average grade and width of 22 vein samples is 1,838 g/t silver over 0.41 m. Silver mineralization consists primarily of argentite, pyrargyrite (ruby silver), and friebergite in quartz vein and breccia zones developed within a quartzite host. Results of the channel sampling program are listed below.

A series of laboratory bench tests were been carried out by BC Research Inc., Vancouver, on a composite sample from the LIL property. The composite sample contained a silver grade of over 3,400 g/t silver. Silver recoveries of 94 – 98% were obtained through flotation with grinds ranging from 37 – 96% passing 200 mesh, with recoveries increasing with finer grinding. A single bulk concentrate grading 7%–10% silver could be obtained, with potential contaminants such as mercury, cadmium and selenium well below problem levels. Arsenic is also low, and may be further suppressed in the concentrate cleaning stages. BC Research Inc. concluded that high silver recoveries were possible using a simple processing flow sheet.

The property is considered to have the potential to host a high-grade silver deposit based on the quartz vein and breccias as well as potential for a larger carbonate replacement deposit. Further exploration work should be aimed at diamond drilling to test the high grade silver veins and further surface mapping and sampling as well as an airborne geophysical survey to investigate the potential for a larger mineralized system.