The multiple altered and mineralized intercepts in all three drill holes confirm a strong mineralizing environment, and are encouraging indicators for continued drilling. The 2021 drill program is predicated on extending mineralization both to the southeast and northwest of the known La Esperanza vein mineralized envelope, which is being successfully accomplished.  The La Esperanza vein is exposed on surface for 200 m, and has now been extended by drilling under volcanic cover for an additional 325 m for a total strike of 525 m, and is traceable by geophysics for over five (5) kilometers along a NW-SE trend, as shown in Fig. 2 below. The Company is planning a comprehensive geochemical sampling and ground geophysics program to evaluate the 5 km strike extent. Drilling to date has defined the La Esperanza vein to a depth of 350 m, and management is using as a model the neighbouring La Colorada Mine of Pan American Silver Corp. (“PAAS”), located 35 km southeast of La Esperanza, where epithermal vein mineralization is noted down to 1,000 m below surface underlain by skarn mineralization to a depth of over 1,800 m. Both projects share a similar geologic setting with the epithermal veins hosted in higher volcanic sequences underlain by sedimentary formations (Ref.: PAAS La Colorada Technical Reports and news releases).

Bahman Yamini, President and CEO of Canasil commented: “The results from the initial drill holes on the southeast extension of the La Esperanza vein along strike and to depth confirm that the vein structure can be located as projected in a previously blind zone, and represent a significant increase to the overall mineralized envelope as previously reported. While the wide altered and mineralized zones and the strong epithermal vein textures observed in all three drill holes are encouraging, the higher grade intercepts are narrower than those previously seen from the La Esperanza vein.  Such variations in width and grade are not uncommon in large epithermal vein systems. The La Esperanza project is located in a prolific sector of the Mexican silver belt known for large high grade silver mines and deposits. Continued exploration drilling is warranted to expand the system and its potential.”

The La Esperanza silver-gold-zinc-lead project covers 14,916 hectares, located 100 km SSE of the city of Durango in southern Durango and northern Zacatecas States, Mexico. The project is easily accessible from Canasil’s operating base in Durango with excellent infrastructure. The project is located on the well-recognized world class Fresnillo silver belt, hosting a number of prominent silver mines such as the San Martin-Sabinas mines of Grupo Mexico and Peñoles, the La Colorada mine of Pan American Silver and La Parrilla and Del Toro mines of First Majestic Silver, Fresnillo PLC’s Fresnillo mine, and Fresnillo-MAG Silver joint venture’s Juanicipio mine.

A series of silver-zinc-lead epithermal veins are observed over a northwest-southeast striking zone extending over approximately 15 kilometres hosted in the Lower Volcanic Group. Mineralization occurs in low to intermediate sulphidation veins, primarily striking northwest and dipping southwest. The main La Esperanza vein, located in the southeast of the project area, is a banded and cockade white to grey quartz breccia epithermal vein with silver, gold, zinc and lead mineralization associated with argentiferous galena, silver sulfosalt minerals and sphalerite. Drilling to date on this vein has outlined a mineralized envelope over a strike distance of 525 m and to a depth of 350 m, defined by mineralized intercepts over appreciable widths with high silver-gold-zinc-lead grades, that is open in both directions to the northwest and southeast along strike and to depth. Alteration of the volcanic host rocks extending along strike from the La Esperanza vein outcrop, the spatial association with a discrete broad magnetic anomaly (possibly an igneous intrusion at depth), as well as local drainage patterns has outlined a target extending for over 5 kilometres in this area. Further details are listed under the La Esperanza project profile on the Company’s website www.canasil.com, and have been previously reported in the company’s news releases.

The drill program is implemented by the Company’s exploration team in Mexico under the direction of Eng. Erme Enriquez (CPG). All core samples are logged and prepared at the Company’s core storage facility in Durango, Mexico, and sent to ALS Laboratories in Zacatecas, Mexico, for preparation and then on to ALS Global in Vancouver for gold and silver analyses by fire assay with an atomic absorption finish (“FA-AA”) on a 30 gram split, and for silver, copper, lead, zinc and trace elements by ICP analysis following digestion of 0.50 gram sample in aqua regia. Over limit silver and copper are assayed using an aqua regia digestion, followed by ICP-AES or AAS finish, and over limit gold and silver assayed by gravimetric finish (Au-GRA21 and Ag-GRA-21). The Company's QA/QC program includes inserting certified analytical standards and blanks into the sample batches, and the subsequent diligent monitoring of results for quality analytical assurance. 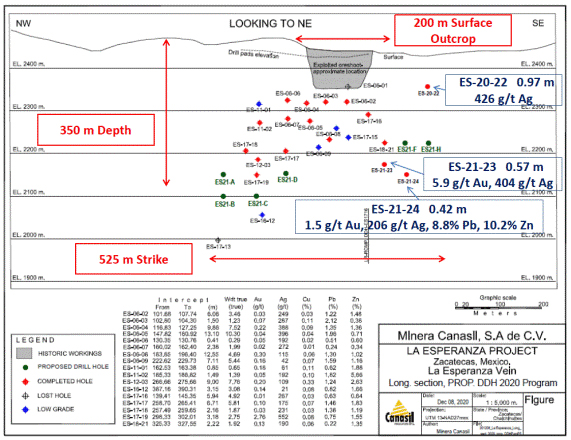 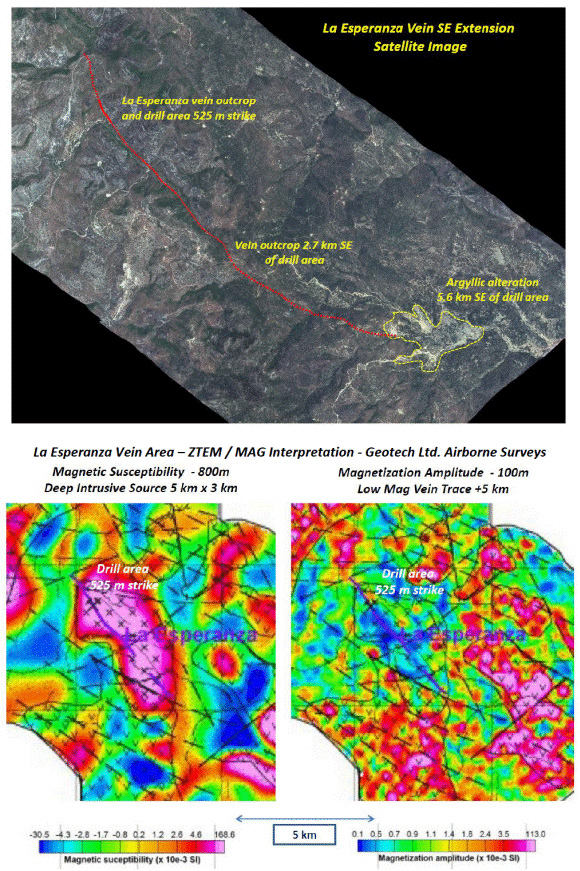