Vancouver, August 27, 2013 - Canasil Resources Inc. (Canasil, TSX-V: CLZ, DB Frankfurt: 3CC, “Canasil” or the “Company”) announces that the Company has mobilized for a planned diamond drill program at the Brenda gold-copper project in the Kemess-Toodoggone camp in north-central British Columbia, Canada. The objective is to complete a deep drill hole to a depth of approximately 1,000 metres to test the down-hole extension of the previous drill holes BR-07-04 and BR-07-05, which returned mineralized intercepts with increasing grades down to a depth of 562 metres.

The deepest mineralized intercept in drill hole BR-07-04 returned 58.0 metres with 0.707 g/t gold and 0.119% copper from 504 metres to 562 metres. The drill hole ended in the upper volcanic formation and did not pass into the main intrusive formation, which is anticipated to host higher grade mineralization, as shown in the attached drill section. The mineralized system appears similar to the deep targets successfully tested and discovered at the Kemess Underground (North Kemess) deposit by Northgate Minerals Corp. and AuRico Gold Corp., located approximately 20 kilometres southeast of the Brenda project, where the higher grade mineralized core occurs at depths of 750 metres to 1,250 metres. Drilling is expected to start by the end of August 2013 and should be completed by mid-September, 2013.

About the Brenda project:

The Brenda gold-copper property covers 4,450 hectares, and is located in north-central British Columbia, Canada, 25 km northwest of the past producing Kemess South Mine. Cumulative exploration expenditures of over $3,500,000 to date include satellite surveys, airborne and ground geophysics, extensive geological mapping and sampling and over 10,000 metres of diamond drilling in 63 drill holes. These programs have confirmed the potential for a deep-seated porphyry gold-copper system at the Brenda project, similar to the nearby Kemess Underground (North Kemess) deposit advancing through feasibility by AuRico Gold Corp. with indicated resources of 3 million ounces gold and 1 billion pounds copper (185 million tonnes with an average grade of 0.48 g/t Au and 0.25% Cu).

The increasing gold and copper grades at depth and the strength of the highly altered mineralization observed in the drill core, in conjunction with the strong anomalies observed in the geophysical survey, are highly encouraging and indicate the potential for a large deep-seated gold-copper porphyry system. The mineralized environment observed at Brenda appears similar to that of the deep-seated Cadia East underground gold-copper porphyry deposit of Newcrest Mines in Eastern Australia, and the adjacent North Kemess deposit, which occur below a depth of 600 metres to 750 metres.

About Canasil:
Canasil is a Canadian mineral exploration company with interests in precious and base metal projects in Durango, Sinaloa and Zacatecas States, Mexico, and in British Columbia, Canada. The Company’s directors and management include industry professionals with a track record of identifying and advancing successful mineral exploration projects. The Company is actively engaged in the exploration of its mineral properties. 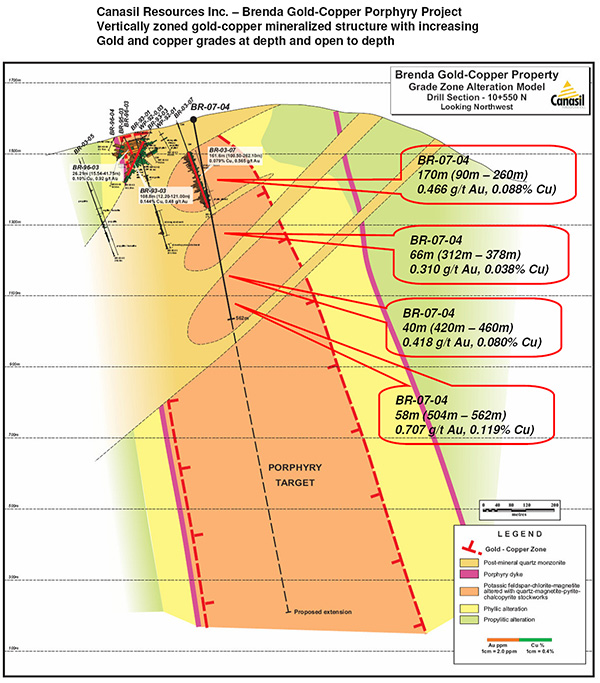