Canasil President and CEO, Bahman Yamini, commented: “We are pleased to report that drilling has started as planned on the La Esperanza vein at the La Esperanza project. Past drilling on this vein returned excellent results, identifying high-grade mineralized zones open along strike in both directions to the NW and SE, and to depth. The planned drill program will test extensions of these zones along strike and to depth, and is designed to expand the mineralized envelope delineated to date. The La Esperanza project covers a very large area with multiple high potential epithermal silver-gold vein occurrences. The project is exceptionally well located in a region with world-class silver-gold mines and deposits and presents the opportunity for discovery of a significant high-grade silver-gold epithermal vein deposit.”

The La Esperanza vein, located in the southeast of the project area, outcrops for 150 metres and has seen past artisanal mining to a depth of 100 metres below the vein outcrop. Airborne geophysics and the surface alteration signature indicate that the buried vein structure may extend up to five kilometres along a NW-SE strike. The vein textures and symmetry of the vein observed in past drill intercepts suggest a well-developed epithermal environment hosting high-grade gold, silver, lead and zinc mineralization. Drilling to date has delineated the La Esperanza vein mineralized envelope over a strike distance of 425 metres and to a depth of 350 metres. The planned drill program is designed to expand this envelope in both directions along strike and below prior drill holes, as outlined in the table, plan map and long section below:

The La Esperanza silver-gold-zinc-lead project covers 14,916 hectares, located 100 km SSE of the city of Durango in southern Durango and northern Zacatecas States, Mexico. The project is easily accessible from Canasil’s operating base in Durango with excellent infrastructure. The project is located on the well-recognized world class Fresnillo silver belt, hosting a number of prominent silver mines such as the San Martin-Sabinas mines of Grupo Mexico and Industrias Peñoles, the La Colorada mine of Pan American Silver Corp., Fresnillo PLC’s Fresnillo mine, and the Fresnillo-MAG Silver Corp. Juanicipio mine.

A series of silver-zinc-lead epithermal veins are observed over a northwest-southeast striking zone extending over approximately 15 kilometres hosted in the Lower Volcanic Group. Mineralization occurs in low to intermediate sulphidation veins, primarily striking northwest and dipping southwest. There are five principal vein outcrops identified within the project area, several with evidence of past artisanal mine workings. The main La Esperanza vein, located in the southeast of the project area and the main focus of exploration to date, is a banded and cockade white to grey quartz breccia epithermal vein with silver, gold, zinc and lead mineralization associated with argentiferous galena, silver sulfosalt minerals and sphalerite. Drilling to date on this vein has outlined a mineralized envelope over a strike distance of 425 metres and to a depth of 350 metres that is open in both directions to the northwest and southeast along strike and to depth defined by mineralized intercepts over appreciable widths and high silver-gold-zinc-lead grades. Alteration of the volcanic host rocks extending along strike from the La Esperanza vein outcrop, the spatial association with a discrete broad magnetic anomaly (possibly an igneous intrusion at depth), as well as local drainage patterns has outlined a target extending for over 5 kilometres in this area. Further details are listed under the La Esperanza project profile on the Company’s website www.canasil.com, and have been previously reported in the company’s news releases.

Particular care and attention is being paid during all operations to ensure the safety of local communities and the Company’s and contractors’ personnel working on site. 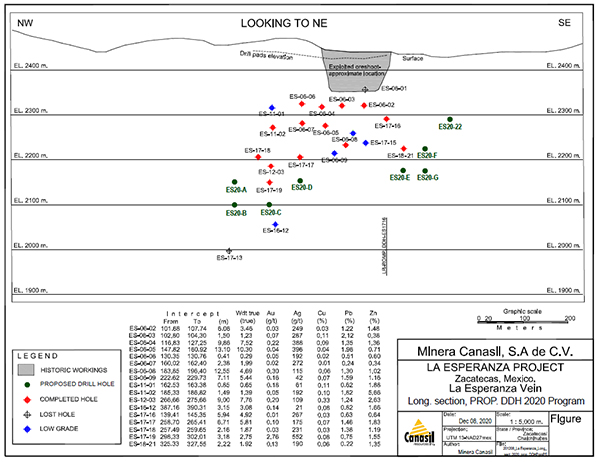 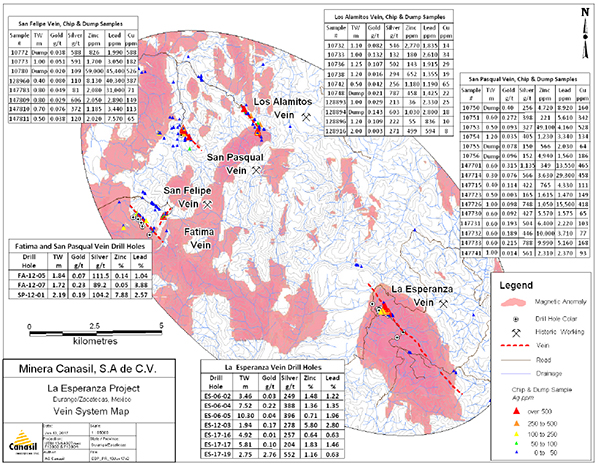